To understand the Cervélo RCA, you must first know about Project California. Cervélo is a Canadian company, but it’s cutting-edge research and development facility is in the Golden State. This is where they come up with and test out their latest ideas, and employ the best of those ideas into American-made hand-built super bikes.

The R in the name is for the R-series. That’s where their “classic” road bikes are housed. But calling them, or the RCA for that matter, “classic” is more about the aesthetic, as Cervélo has incorporated not only carbon-fiber, advanced building techniques, and innovations like BBright bottom bracket shells, and future-proof cable management, but aerodynamics into what looks like a classic road bike.

The innovations in the R-series came from the RCA. And this latest RCA produces more advances, which will eventually make their way into the rest of the Cervélo line. The point of the RCA is to take everything, in every parameter, improve all of them simultaneously, and have them all in a single bike. While the frame molds for the RCA come from the previous iteration, as Cervélo’s engineers have yet to find any way to better the aerodynamics, position, and ride quality of the older frame, they were able to improve the frame itself.

Before getting to the improvements, a few words on what the RCA has already done magnificently. The Squoval 3 tubing has aerodynamically-tuned shapes, with cable runs going almost entirely internal. They haven’t been able to figure out how to get more aero without going to the S-series design. The geometry specifics are based on Cervélo’s biomechanical research, yielding a size run that has a steady stack and reach progression as you go up in size, so that each size is equally bigger, and thus easier to fit. In terms of ride, it’s the most laterally stiff of the R-series, and still the lightest, and it has the most tuned vertical flex thanks to their ComfortPly technology.

To get to this improved version, Cervélo’s engineers analyzed their product and realized they could make it stronger and stiffer by creating a more complicated lay-up. They now utilize over 500 individual pieces of carbon-fiber cloth in making the RCA. These are laid-up by hand, which explains why it takes a whole day to produce a single frame, and the pieces are weighed and recorded before they’re put into the mold. They even found a way to strengthen the top and down tubes—there’s more material to make the tubes more crush-resistant. It actually weighs 3g more.

But they found a way to cut 38g out of the fork. The frameset is now 35g lighter than before. Only 947g for frame, fork, hardware (the heavier mechanical shifting hardware), and paint.

The fork is their proudest accomplishment of the new RCA. The 38g weight savings comes while still being 15% stiffer laterally and 7% more compliant vertically. And still meeting all the safety standards of their heavier forks, which are higher than the industry’s standards as a whole. The fork makes for a more comfortable ride, and easier steering, easier turning, easier sprinting, easier climbing out of the saddle. That’s why the fork, with a 1 1/8″ to 1 3/8″ tapered steerer btw, is given bright red paint at the crown. It calls attention to the new design.

Part of the deal with the design is that fork is made at the Project California facility and all production will stay there. Because it’s so unique, from the materials, to the lay-up, to the shape, they’re protecting their intellectual property.

Adding to their OCD attention to detail is the paint, which is largely glossy clear-coat. The Cervélo logos are created by paint masking, with an effect that is subtle and sophisticated, and very much complements the overall aesthetic of the frame.

The frame comes with a seat post clamp and is designed to work with 27.2mm round seat posts. The BBright bottom bracket shell comes with a PF30 bottom bracket to work with BBright cranks: just about every crank on the market either comes in a BBright version or can fit with the help of adapters. The fork comes with an FSA integrated headset installed. The Future-Proof cable routing fitments come with, and if you go electronic, fit the Shimano battery in the seat post or the Campagnolo battery in the seat tube (Cervélo created shorter riv nuts so the Campy battery would have an easier time fitting by the bottle cage mounts). The integrated power meter magnet has not been included in this iteration as most crank-based power meters have accelerometers built into them (SRM is an exception).

The RCA is the result of Cervélo engineers figuring out how to go past their limits. Again. 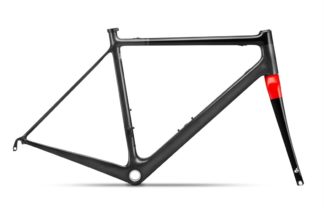